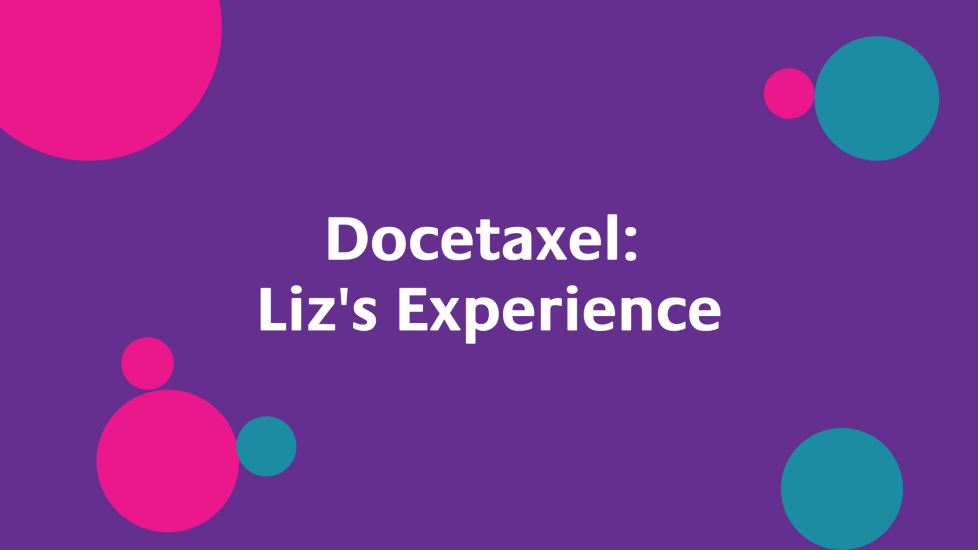 We are taking a look at different chemotherapy treatments for secondary breast cancer and then a patient shares their experience. This week Liz Gluckman talks about Docetaxel.

When were you diagnosed with secondary breast cancer?

I was diagnosed with secondaries in autumn 2003; I am coming up to 18 years post metastatic diagnosis and being given a prognosis of 6 months.

Where are your mets located?

My solid mets are mainly bone, 20+ in my spine and pelvis, I have effected nodes in my retroperitoneal area and 2 suspicious lesions in my liver which we are ignoring for now as

I am constantly on treatment anyway. They will announce themselves at some point no doubt.

I also have an endocrine paraneoplastic syndrome. Basically my cancer gives off a protein and I make antibodies to this protein. Unfortunately the antibodies have caused more damage than the cancer. They have taken 70% of my vision so far and cause my serum calcium to frequently rise dangerously high.

What treatment line are you on?

I have been on chemo over 10 times so far, including Docetaxel 5 times between 2008-2014. It always worked very well for me. Paclitaxel which I finished last year was not quite so hard hitting, on either me or the cancer.

What was your experience of Docetaxel?

With Docetaxel I had different side effects each time and sometimes with each cycle. The first course I suffered badly and sometimes embarrassingly with sudden diarrhoea. Second was mouth and oesophageal issues. Third, I can’t remember, so it can't have been too bad. Fourth protocol I had constant UTIs and the fifth I found exhausting. So I honestly don’t think you can predict side effects and it is best to be prepared and then deal with them. Never hesitate to tell your team of any problems as they will be able to help you.

At the moment I am on an immunotherapy which started in 2014 and Palbociclib. I have had numerous hormone inhibitors and 4 different bisphosphonates and am currently also on Letrozole and Denosumab.

What advice, if any, would you give to someone about to start this treatment?

I would suggest having Imodium Instants in your pocket when out and about. I found the same with Capecitabine every time I was on it. I know it can be hard but try not to look for side effects. Do try to eat and rest well, keeping up with some form of exercise. Having 2 kids to grow up didn't allow me to rest as much as I might have. But it did keep me moving whilst I could and kept me from too much introspection.

My best advice is to view chemo as your friend. It will hopefully work very hard to keep you well. If my next chemo is Docetaxel again, I will be fine with that.