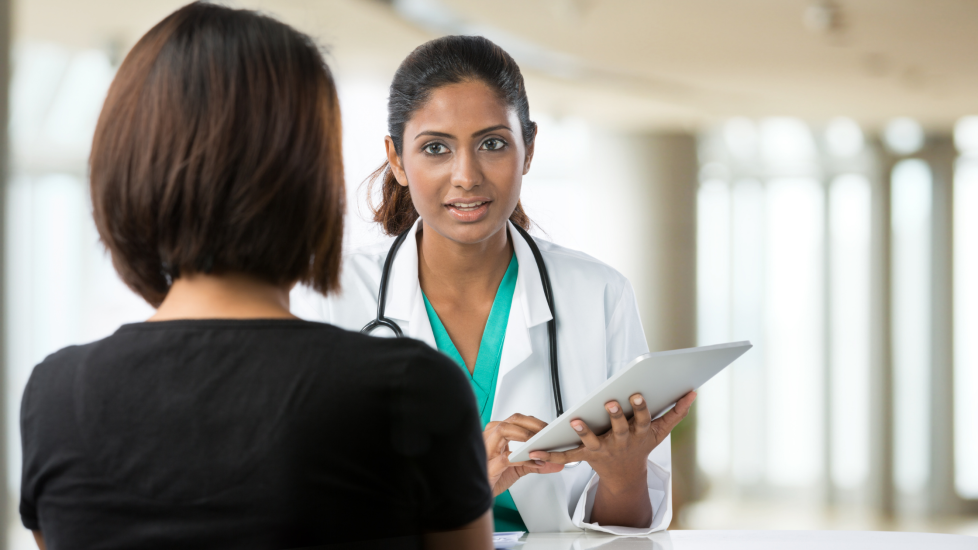 In the run up to having my reconstruction I had quite a few appointments with my consultant and also had the opportunity to talk things through with my breast care nurse. My consultant was also happy to show me photographs of previous reconstruction operations that he had done and also offered to put me in touch with ladies who have had the procedure so I could talk through any concerns.

We talked through the different reconstruction procedures that were available. For me, practical and lifestyle considerations were paramount. I’m quite slight and petite and I’m also quite an active person. We decided that the procedure using the Latissimus Dorsi muscle was the best one for me along with using implants - I don’t have a lot of my own fat and tissue so opting for a Tram flap or Diep flap wasn’t a viable option for me . I had had a mastectomy on the right hand side 8 years previously so I was having a delayed reconstruction on my right side. On my left I was having a skin sparing mastectomy and immediate reconstruction as part of the same operation. I was warned that the two sides might look a little different because delayed reconstructions tend to be a bit firmer and sit a bit higher than an immediate reconstruction.

In terms of recovery I was told I would need around 6 weeks off work and that I would need to be fairly strict and dedicated with myself in following the physiotherapy exercises that I would be given. I was also told to get a supportive non-wired sports bra and to wear this as soon as the surgery had been done.

The operation itself took around 13 hours. I was pretty exhausted and was in quite a bit of pain for around a week and was kept in hospital during this time. I had quite a lot of surgical drains left in (9 I think) - more than when I’d had my mastectomy. I was also quite stiff from the operation and the physio exercises were harder to do than I thought they would be. But once I was home I just tried to gradually increase the amount I was walking each day and I religiously followed the physio exercises twice a day. Bit by bit things got easier and I started to feel more like my normal self. I think 6 weeks was definitely the bare minimum that I needed off work. I ended up taking off 3 months in total but then it had been quite a long and complex operation.

I also had bilateral nipple reconstruction a few months after the procedure. This was very straightforward and done under a local anaesthetic. Essentially my surgeon took some skin from my new breast and rolled it into a cylinder and stitched it back on to the breast. I don’t have any feeling in the skin on my reconstructed breasts so the procedure wasn’t painful at all and after my breast care nurse did a nipple tattoo they looked quite realistic.

I’m now 9 years on from the procedure. The cosmetic appearance of my breasts is still really good. Despite being warned they would look different they actually look quite symmetrical and realistic. My surgeon also made the incisions in my back diagonally which means I can wear clothes with a low back and the scars are hidden. I did suffer with some nerve pain in the years following the procedure but this has settled down now. I don’t have any feeling at all in the skin on my back - pretty much from my neck down to my waist. But that doesn’t really bother me. I had magnetic ports put in so that my implant size could be adjusted with saline solution but I found that they caught on my rib cage and they also randomly set off alarms in shops. So I opted to have them removed a few years after the procedure. Unfortunately I got an infection which turned into sepsis. So I had to be admitted to hospital and have an emergency operation to remove one implant that had become infected. But I had a new implant put back in 3 months later and haven’t had any problems since.

Overall I am very pleased with the result. I also like that I don’t have to wear a prosthesis anymore - having worn one for 8 years prior to the procedure I was glad to get rid of it. On occasions when I have to have a physical exam the medical staff always remark on what an amazing job my surgeon did - incredibly neat stitches and very realistic looking. I have also found that I haven’t had any loss of function at all or loss of strength as a result of having the latissimus dorsi reconstruction. I was warned before the operation that this might happen but it hasn’t affected me nor prevented me from doing any of my normal activities from riding horses to wrangling with dogs or sheep.

I was diagnosed with cancer in 2015 and after two medical professions saying they thought the lump on my breast was nothing to worry about following mammogram came back for the consultant to say I'm afraid I am 90% sure it is cancer.

From this moment on I felt I was on a roller coaster which I could not get off. Cancer nurse talked about getting my finances etc in order which really scared me as I felt they were telling me this is it??

I got told all the options re operations but the consultant would not say which was more suitable. I had to choose myself which was scary. Luckily I knew people working in plastics so managed to get help. The operation I chose seemed to be the one they would choose too.

The main operation went well which was latissimus dorsi flap with no complications. I then went in to have chemotherapy which I found hard going as I had many side effects. My mum, family and friends helped me through.

In 2019 I had a lump appear on the side of breast removal again and told nothing. The biopsy was negative. Lump got bigger and went back but was in Aberdeenshire by this time and the consultant said straight away it is cancer. They thought local occurrence however following scans was told I had Mets in the majority of liver. This was a big blow and hard to take on board. I have had further chemotherapy and again more lumps came up on the best removal side for 3rd time so this time I got radiotherapy which in itself was fine but just had an overwhelming tiredness. The radiotherapy did help as lumps were skin deep only.

At present I am on capecitabine. The first dose did not go well but reduced 20% and this time still have some side effects but not as bad. Within the year I have had 2 progressions but I am sure a scan 19th so keeping fingers and toes crossed.

I do still have good and bad days but I will continue to  fight as much as I can.

The 2nds Together Facebook private support group has been really lovely and supportive and you feel you are not alone. Thank you everyone x.

I had a mastectomy and reconstruction at the same time in April 2009. I was given a leaflet about the different types of reconstruction to take home and think about. I wasn't sure at first about whether to have one. But eventually decided, after discussing it with my family, to go ahead as I felt I wouldn't want to go in again for another long operation. I saw my surgeon several times and everything was discussed. I had thought I could go for a TRAM Flap reconstruction which takes muscle from your belly area - a tummy tuck at the same time!!! But amazingly I didn't have enough belly fat which I found hard to believe. In the end I had a back (Latissimus dorsi) flap reconstruction. This uses the large muscle below the shoulder blade. The muscle is removed from the back and then turned, threaded through a cut in the armpit, and brought round to the front. All the blood supply to the muscle is intact during the operation which gives a higher chance of success. I was told that the surgeon might need to use an implant to even up both breasts which I was not happy about and asked him to try to avoid this. The surgeon explained that I would have a scar horizontally along the right side of my back and that the right side of my back would be permanently numb as the nerves would be damaged. I was also told that the reconstruction area would be permanently numb, that there was a slight chance of infection and that the tissue might not take. The operation was expected to take 8 hours approximately and I was told that it would take several weeks to recover.

The evening before the operation the surgeon had to draw black marker lines on my breast and other areas, I presume to keep him right during the operation!! He also took photographs for before and after shots. It felt very strange posing topless. The surgeon explained that he had to be very careful about which camera he took on holiday as it could be embarrassing if he took the wrong one!!!

After the procedure the first thing the surgeon said was that he didn't need to use an implant which I was very pleased about. I was very sore and had drains which were uncomfortable and made sleeping very difficult. I was in hospital for 5 days until the drains were removed. I was on strong painkillers and remember waiting impatiently for the next dose particularly at night as it was quite painful. A physiotherapist came to show me arm exercises to help prevent lymphedema and to get me up and out of bed. I did the exercises and happily did not suffer from lymphedema. I had to be very careful of the reconstruction area for a few weeks making sure I did not bump it and I got used to doing things with my left hand!!! I had a build up of fluid on my back where the muscle had been removed. I went to the breast care nurse at the hospital who removed it and luckily it has never happened again.

I barely notice the reconstruction now apart from my back being numb. I had a nipple reconstruction a few months after the operation and a nipple tattoo later to match up with my other side – my first and only tattoo.