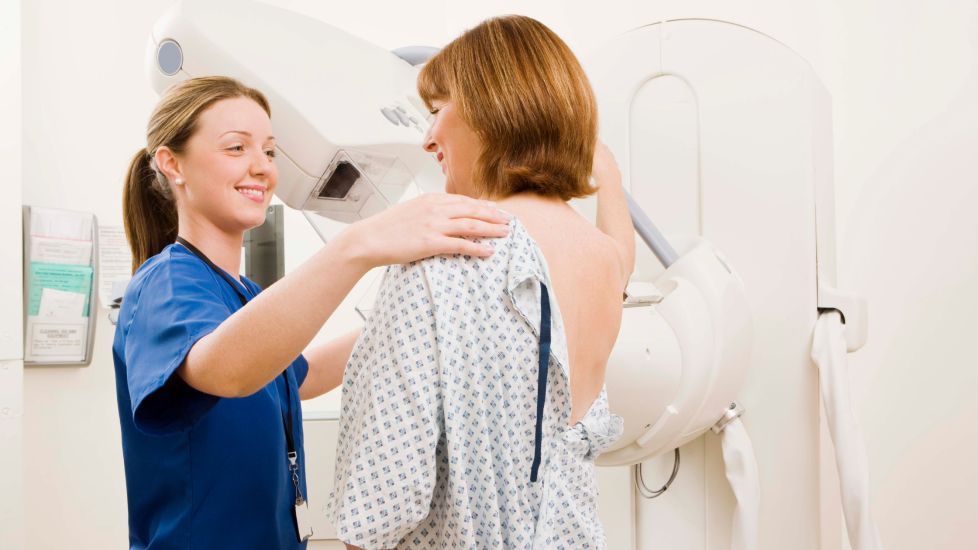 Breast screening in the form of a mammogram is provided to all women between the age of 50 and 71 every 3 years, as the likelihood of getting breast cancer increases with age. It has been debated recently in parliament, to bring the age of screening down, with the increased number of younger women being diagnosed, however the Government have not changed the age of screening.

A mammogram is an X-ray that looks at breast tissue. This can be done at a screening unit as part of routine screening or as part of a breast clinic in a hospital if you have been referred by GP.

During a mammogram, you are needed to undress to the waist. The breast is placed in between the mammogram machine and a plastic plate which firmly flattens the breast. This can be uncomfortable, but is necessary to obtain a clear picture, the pain will normally resolve once the procedure is finished. The procedure only takes a few moments. 2 x-rays are normally taken, one from the side and one from above. It is normal for both breasts to be imaged.

My experience of a mammogram

I have had 3 mammograms. All in different locations - 1 in an unfamiliar hospital, 1 in a mobile unit, and 1 at a cancer hospital. Wherever the location the staff were kind, respectful and I was treated with dignity. Of course it’s weird taking your clothes off for a stranger and the room isn’t particularly warm..! but the whole procedure takes very little time and then you’re back in your clothes and on your way home.

I found the mammograms uncomfortable rather than painful. It is important to get all the breast tissue scanned and it surprised me how far the tissue extends - right up under your arms, which for me was the most uncomfortable bit. The whole breast is laid on a flat scanner, at an angle, with the corner of the machine in the armpit. The lid of the scanner comes down and squashes the tissue flat to get as good a picture as they can. It really doesn’t take long and then you are released, for them to move the machine to the other side. Once they have checked the scan images, you’re done.

I had my first mammogram at 49, 3 months before I was 50. And for some reason was recalled again at 51 just a 2 year interval. 12 months on, I found a lump and had my 3rd mammogram followed immediately by an ultrasound and biopsies. They told me there and then they were 99% sure it was cancer. My secondary diagnosis came 3 months later, after 4 rounds of chemotherapy and a repeat CT scan to check lung nodules. They were benign, but a lesion was found on my sternum that had reacted to the chemo and was therefore cancerous.

I am currently NED and have 6 monthly PET CT scans to monitor. I take Letrozole daily and have Denosumab injections 12 weekly.

Just to add, I followed up my mammogram with the unit that did it 12 months before my diagnosis as I was curious to know if there had been any sign then, that was missed. They reviewed the scan and confirmed to me that there was no evidence. It just goes to show that mammograms are only a snapshot at that particular time and that self examination is far more important.