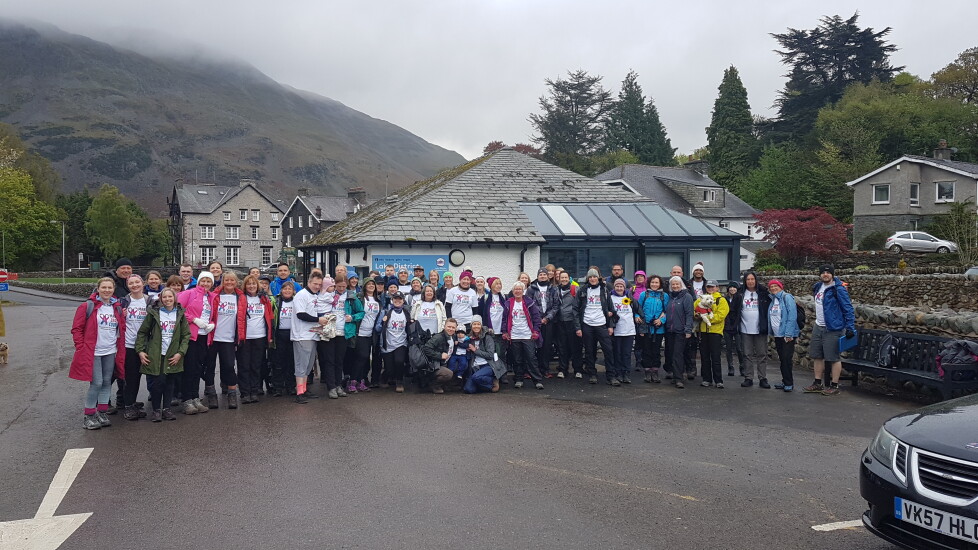 Ever since I was diagnosed with Secondary breast cancer in late 2017, and came across Lisa Fleming’s story on how Make2ndsCount was born, I knew I wanted to support the charity in some way. Many people raise awareness by opening their world to social media which I totally admire and appreciate, but that wasn’t for me, so I knew I wanted to do something else.

I love walking, I’m not fast and definitely not the most fit (even before cancer was part of my life), and usually a pub has to be involved somewhere on route, but after completing the Thames Path Challenge in 2017 with my friend Ruth, I decided a walk for Make 2nds Count would be a great idea (which was pretty stupid as my body seized up for days after it!). I would choose a route, enlist a group of friends, and hope to raise a few grand. My family had raised funds for Make 2nds Count holding a coffee morning, a nearly new sale, and afternoon teas, so we had momentum!

Even though I live in London with my husband David, I’m born and raised in Morecambe, Lancashire, and wanted to choose a route close to home. After a rainy-day boat trip around Ullswater in Cumbria, near Penrith, followed by Afternoon tea with my Mum and sister, we decided that the Ullswater Way would be a good option. In my mind, it was a good length of 20 miles, had check points for people who didn’t want to do the whole way, and it was around Ullswater, so had to be pretty flat, right? I contacted the Ullswater Way to gain permission, set up a Facebook event and a Just Giving page. Saunter for Secondaries 2019 was happening! 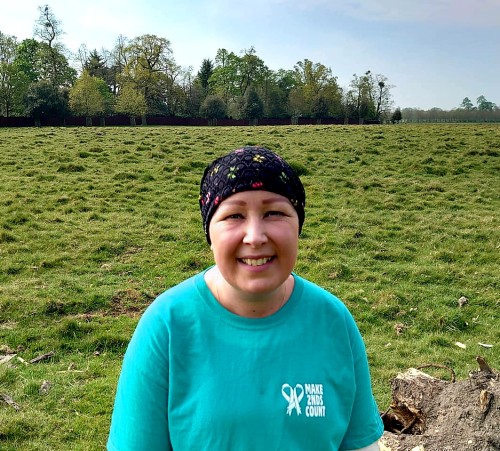 A couple of weeks before the walk, one of my colleagues decided to tell me that the Ullswater way wasn’t as flat as I was claiming, and that there are a few steep parts, but I laughed it off…even though he was from the area, and an avid walker! It was too late to change location now! We decided to start at around 8am at Glenridding, walking clockwise along the Ullswater Water Way, with check points at Aira Force, and Howton, and lunch at Pooley Bridge which was approx. halfway round.

You can imagine my surprise when, expecting max of 20 people to join, 65 friends and family volunteered to take part. Family, friends (some I hadn’t seen for years), and friends of friends that I’d never met before, travelling from all over the country to be there. Seeing all their faces on the morning of 27th April was overwhelming – I couldn’t believe so many people cared enough, and that alone was fulfilling enough for me.

So, the morning of the walk, it was a typical British (Northern) weather forecast of rain, everyone showed up kitted out in walking gear, bags full of snacks and a vague map handed out including emergency numbers. My uncle Greg and friend Ian were our pit stop crew, with a car stocked with water/snacks, they would meet everyone at each check point, had a list of everyone’s mobile numbers, and Greg is an ex paramedic…so we were in safe hands. 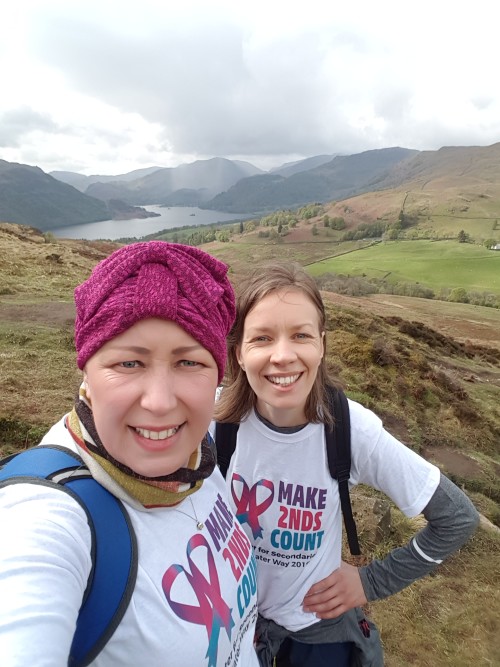 After my short pep talking about Secondary Breast Cancer, where I mostly just bumbled and nearly cried, and an update of our fundraising target (we had reached £10K the day before), we were off!

The first few miles, just like any walk, were relaxed, people catching up, admiring the view, enjoying the sunshine, a few ‘competitive’ team members setting the pace, and we reached Aira Force, a toilet and our pit crew without any hitches. I can’t say the same for the second leg to Pooley Bridge! A couple of miles in, I was walking with a few of my friends, discussing how I might finally start watch Game of Thrones before the last series came out, and we came across my friend Anna who had slipped and couldn’t move her leg. There was a whole group of others with her, but no way my uncle could get up to us in the car, as we were no where near a road. We continued as there were people helping, but heard a while later, the mountain rescue had to be called – not the way I wanted the day to go. However, maybe it was a blessing in disguise for her, as a half an hour or so later, as we innocently came around a corner, still full of the joys of the day, we were faced with a half mile, pretty steep incline with no other route to take!

I will say, that part of me wanting to do this walk, was to prove to myself, that in the midst of chemotherapy, I can still do it, still be the ‘old me’ – that my body could still cope. Cancer takes a lot away from you, it can break you down in many ways, and I wanted, or needed, the sense of achievement. I walked up the hill with my sister, mum and her friend, and after a few tears, and me deciding I was the only one having issues with it (and maybe I should of listened to my colleague…) we reached the top, to beautiful views, David who had run back 2 miles to see me, and a sigh of relief (and yes, most people were talking about “that mountain” for a long time after).

A few miles later (on much flatter ground), the group I was with reached our lunch spot – I was pretty relieved to see the faces of my Dad and uncle and tuck into my mum’s amazing picnic! Texts from the front groups, said they were about an hour down the road so we would see them at the pub. After re-fuelling, most continued, but after a few strong words from my friends and family, I decided that my body (and my oncologist) wouldn’t thank me if I continued two days after chemotherapy, something I was pretty annoyed with myself about but I had to admit, I was exhausted. I joined my parents, and uncle to meet everyone at the next check point and was great to see all their faces, some a little wearier than others!

We drove to the end point, when we were comfortable that everyone had passed the checkpoint (or we had been in contact with them) to welcome the finishers. Now, maybe luck was on my side, but not for the 60 people that had continued on the walk….that’s when the heavens opened! I was inundated by messages from my friends suggesting ‘saunter‘ wasn’t the right name for it, and a few messages mentioning they would never do anything for me again! ????

Around 4pm, the first lot of people finished, my uni friend Lynsey who I hadn’t seen for around 8 years, along and her friend Andy, followed by my friend Emma’s (who was heavily pregnant and wisely opted out from taking part!) boyfriend, sister, friend and dog. We cheered them home, along with a few others who followed close behind, including David who had decided to run part of it! We took haven in the pub to welcome in all the rest of the (very very soggy and tired) team. A few damaged ankles, a rescue on the back of a farmers tractor and my friend Anna returning from hospital in a full leg cast (ooops), everyone made it back for hugs all round, a few pints, and some food – a job well done! I think a couple were up for round two! 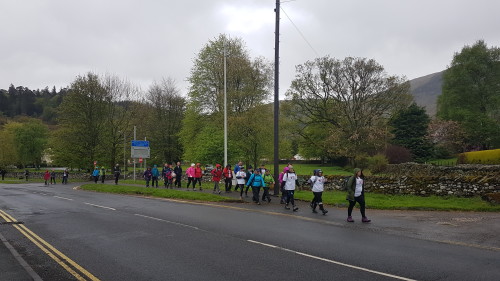 I had decided to purchase t-shirts for everyone, to raise awareness along the walk. That being said…the weather meant that most of them were covered in rain coats, however they worked well in the pub at the end when a whole group of people wanted to know what we were doing, asked to speak to me, and stuffed a bunch of twenty pound notes in my hand. I thought we had ruined their lovely Saturday meet up in their local pub, so was very emotional speaking to them. Everyone headed home / back to their hotels eventually – and we headed back to my parent’s house, for a much needed takeaway and sleep.

Raising money for Make 2nds Count was really my only objective in organising the walk. I am passionate about the work they do, funding research which will develop into trials, giving hope to the thousands of people, like me, who are living with Secondary Breast Cancer. We managed to raise an amazing sum of £16,500 before gift aid which we were all delighted with and totally didn’t expect. However, what I didn’t expect is that with organising the walk, and taking part, I had it 100% solidified that everyone I have in my life, will be there for me, whatever happens – I was unbelievably overwhelmed by everyone giving up their weekends, travelling and some, doing something which they didn’t really like doing! I appreciated everyone so much and felt very very loved.

Saunter for Secondaries 2020 has had to take a little of a back seat due to David and I getting married (yey!), some bad scan results (boo!), followed by sepsis, plus Covid-19. However, more is coming from us - Make 2nds Count is such a great charity, doing real, tangible research/awareness/support with their funds, and we will continue to support them in any way wecan. My best friend’s husband Richard is running the entire length of Hadrian’s wall later this year, to raise money, so keep an eye out for that!