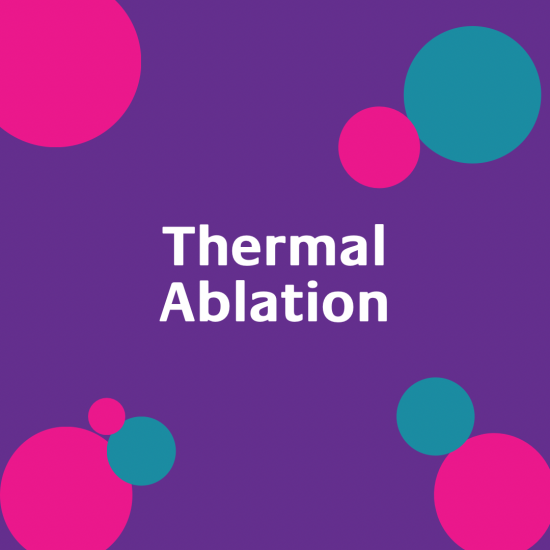 There are different types of thermal ablation.

A needle called an electrode is used.  They put the electrode into the tumour and apply an electrical current (radiofrequency) to it. This causes heat, which destroys the cancer cells. The treated area slowly shrinks and becomes scar tissue.

Microwave energy is sent through a needle into the tumour.  This causes heat, which destroys the cancer cells. The treated area slowly shrinks and becomes scar tissue.

You can have thermal ablation in different ways. It depends on the type of tumour and where it is in the body.

This is the most common method and doesn’t involve surgery.  The electrode is put into the tumour through the skin using images from an ultrasound, CT, or MRI to guide them.

This involves surgery. The surgeon makes several small cuts through the skin and muscle. They put a mini-telescope (laparoscope) through one of the cuts. This helps them guide the electrode into the tumours.

The surgeon does the ablation at the same time as an operation to remove other tumours.

You have thermal ablation in the hospital scanning department, or in an operating theatre. A doctor who specialises in x-rays and scans (radiologist) gives you the treatment.

Treatment takes around 1 to 3 hours. This depends on the size and number of tumours being treated. It is possible to have treatment as an outpatient, but you will usually need to stay overnight in hospital.

After you have had the anaesthetic, you will have an ultrasound or CT scan. These scans help the doctor guide the electrode into the right position. They also help the doctor monitor what is happening during your treatment.

When the electrode is in the right position, the tip is heated for RFA and MWA, or cooled for cryotherapy.

An area of healthy tissue around the tumour is usually also treated. This is because it may contain cancer cells.

Thermal Ablation can be used in the treatment of secondary breast cancer with the aim to reduce the size of a tumour or to relieve pain.

Thermal ablation may be used instead of surgery, if surgery would be difficult. Or it can be used if you are not well enough to have a big operation.

Feeling unwell with a raised temperature

For the first few days after treatment you may have a slightly raised temperature (between 37°C and 37.5°C). And you may feel tired and unwell.

If you had treatment for a larger tumour, or for more than one tumour, you are more likely to have these side effects. This is a normal reaction and is caused by your body clearing away the cells that have been destroyed by the treatment.

Try to drink plenty of fluids and rest for a few days. You should be able to get back to your usual activities after about a week.

Blood in your urine

You may have some blood in your urine after thermal ablation to the kidney. This should only last a few days.

The risk of complications from Thermal Ablation is low so please consult your team if you have any concerns.