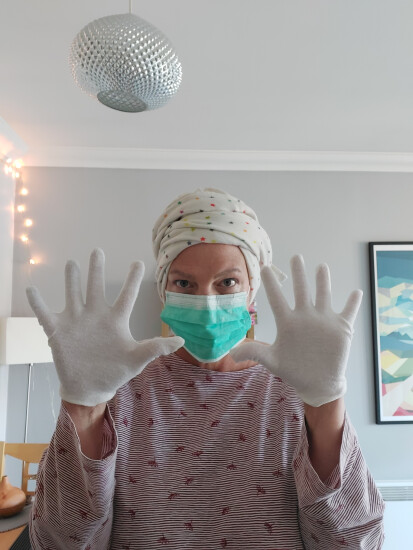 By way of introduction, I was diagnosed with primary breast cancer (ER+, HER2-) in February 2017. I was 43. It was a relatively small tumour with no nodal spread, and therefore considered to be caught early and entirely treatable.  I had a lumpectomy, followed by 20 sessions of radiotherapy, avoided chemotherapy thanks to a genomic predictive test and was sent on my way, by the end of the summer with a plan to take Tamoxifen for 5 years.  I started to recover and went back to work.  The following February I was called in for the first annual mammogram and check-up.  Everything looked clear and I was declared cancer free.  Except, I wasn’t feeling great so I talked to my consultant about the fatigue and low energy.  He ordered blood tests and within a very short space of time, following a bone scan and liver biopsy it was confirmed that my breast cancer had spread to multiple bone sites and my liver.  I am now living with stage 4, metastatic breast cancer. I am 46.

Two and a half years on from that, I have had targeted therapy, 5 more sites have had radiotherapy, oral chemotherapies and various hormone therapies, all of which have provided some stability but have all ultimately failed, after about six months. I started IV chemo in September 2019 and whilst the tumours were responding well, the rest of me was somewhat battered by the treatment.  My bloods could not hold up against the effects of the chemo and were seriously compromised.  I received 3 blood transfusions, had one week in hospital due to neutropenia and countless prescriptions of antibiotics.  My white blood cells, haemoglobin and platelets were regularly seriously low.

I had my 8th cycle of chemotherapy in mid February this year and was due to have the 9th session in mid March.  This had already been delayed by a week to allow my bloods to pick up.  Blood tests showed that my white blood count was low, but at a level that normally the treatment would go ahead.  I was told however, that due to the risk of Corona Virus, they needed my white blood cell count to be considerably higher than normal to go ahead. We know that my counts drop within a week of the dose, and so it seemed sensible to plan for the inevitable.

By the 2nd week in March I was self-isolating, and the cancer centre told me to continue to do this.  I was quietly told that I must not, absolutely must not, get Corona, because I didn’t have the immunity to fight it off.  I am a single girl living alone, so complete isolation is relatively easy to achieve. The challenge has been getting supplies delivered, but thankfully I have a great team of friends who have been dropping off what I need at the door.

I was not originally shielded under the Government’s Covid-19 scheme and therefore not considered vulnerable.  It took until early May, and me proactively seeking to be included via my GP, that I received the shielding letter. I still struggle to get supermarket deliveries.

The plan originally was to continue with the IV chemotherapy but the concern around my blood counts persisted. As the crisis on a wider scale ramped up significantly, I was called to be told the chemo would not go ahead. Instead the full body MRI that was due after chemo 9 was brought forward, with a view to the results enabling my oncologist to make a clinical decision on whether to continue with chemo, thereby risking my chances with the virus, or halting chemo for the time being.

Emotionally this was a difficult time. Whilst I don’t tolerate chemo particularly well, I hated the thought that I wouldn’t be able to have it, thereby risking my tumours progressing.  When your timeline is limited, and you have a window of stability, anything getting in the way of that is unbearable. In the end, the results of the MRI took away the need for a decision.  The chemo had stopped working and the tumours in my liver were progressing again.  Whilst in “normal” non-Covid circumstances my oncologist would suggest a different chemo, he was not prepared at that point to put me in danger of Corona as the pandemic was reaching a peak in the UK.

At the beginning of April I started Fazlodex, a new treatment of hormone injections, which once through the booster doses meant I only had to attend the cancer centre once every 4 weeks.  This is a good compromise during a lock-down situation. It meant I could collect my other medications, receive a port flush, and get my Denosumab injection all at the same appointment, thereby reducing my interactions with other patients and limiting my contact points.

After 3 cycles, I noticed increased pain in my bone mets.  Once this was reported to the cancer centre I was fast tracked straight to the MRI for another full body scan. After a few scanxious days I returned to see my oncologist and my fears were confirmed.  The Fazlodex had not been effective and the disease has continued to progress in both liver and bone.

The priority now is getting the pain under control by various medications and I will start another course of palliative radiotherapy this week to also, hopefully, make the pain manageable.  There will be further discussions once this is complete about whether there will be more IV chemotherapy.

For me personally, a lot has happened from a treatment perspective during the Covid crisis.  I have been fortunate not to experience any delays in either treatment, scans or appointments.

There have been differences of course, to the pre-Covid world, all of which are entirely understandable and what one would expect.  Whilst I have had many face to face appointments, there have also been some by telephone.  There have not been any hugs, which is a significant downside. During the crisis I have travelled by car to a major cancer hospital for MRIs and appointments, the cancer centre where I receive treatment and also the private hospital where I meet my oncologist to discuss the results and agree next steps.

Every time I wore a mask and gloves.  Whilst I recognise the guidance is not clear on how effective these measures are, it felt like the sensible thing to do. I will always err on the side of caution.  I waited in the car in the car park until the actual time of my appointment so as to reduce my time spent with other patients and staff.  I tried not to touch anything.  I was asked to either wash my hands or at the hospital was asked to use 5 squirts of the antibacterial foam upon entry.  At the cancer centre the nurses are wearing masks, gloves and aprons.  I have had my temperature taken remotely each time I have attended the private hospital and cancer centre.  Other than that, measures are in place to keep us as distanced as possible and all my appointments have felt calm.  It is apparent there is regular deep cleaning and disinfecting being carried out.  As always, the nurses are doing a brilliant job to make us feel safe. When I return home I immediately launder all clothes and the “cancer bag” containing note book, snacks, antibacterial etc is decontaminated.

During my treatment I have also had the support of my local Hospice, for me this is The Hospice of St Francis in Berkhamsted, Hertfordshire.  This has continued to be invaluable during the lock-down.  We have been able to continue with group yoga classes via Zoom and also my one to one physiotherapy sessions.  These have the obvious benefit of maintaining my physical wellbeing but in addition it’s been a great way to stay connected and feel part of a group; albeit remotely.  One of The Hospice doctors was able to help out with advice on pain relief when this needed to be ramped up.  Within 12 hours of a phone call they had contacted my GP and a prescription had been sent to my nearest pharmacy.  I’m not sure I would have ever achieved that in “normal” circumstances.

Let us hope the easing of lock-down will keep us all safe.

Should you be interested to learn how I try to live well with Stage 4 cancer, I write a regular blog: Abigail's Blog