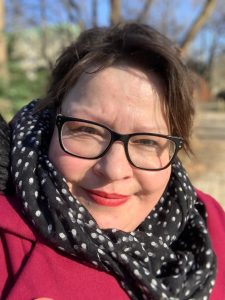 Hi, my name is Dr Bex Lewis (my doctorate is in historical mass communications, though I’m now more involved in encouraging positive uses of digital), I live in Stockport, and am fortunate to live near The Christie, where I get the bulk of my treatment.

I was diagnosed with SBC mid-January 2019, about 16 months after my original primary diagnosis, with a small tumour on T11 of my spine. In November 2019, I was declared NEAD (No Evidence of Active Disease), but in April 2020 I started having chest pains (I was stuck in lockdown in New Zealand at the time), and in July 2020, large tumours were found in my sternum and mediastinal mass (lymph nodes), and after a rough few months I am now being investigated for skin Mets (with a rash on the chest, nodules on neck lymph nodes, and severe lymphedema in my non-treatment arm.

One of the medical team took another look at the scans that had given me the ‘all clear’ after primary cancer and thought they saw a shadow on my liver. I headed into the scanner, which gave me the all-clear on the liver, but indicated a shadow on my spine. After a combination of scans, which originally gave me hope that it was a haemangioma (a harmless collection of cells), eventually, a biopsy determined that there was a very small tumour on my spine (an oligomet = less than 3 tumours of less than 3cm each).

For primary cancer (ER+/PR+/HER2-), which was in my left breast, I had a mastectomy/full node clearance, followed by chemotherapy (3 x EC, 9 x weekly paclitaxel), and 15 fractions of radiotherapy, followed by Zoladex and tamoxifen, swapped to exemestane when I was deemed post-menopausal. The ‘haemangioma’ shrunk on the exemestane which raised further concerns that it was likely cancerous.

For the spinal tumour, I had stereotactic radiotherapy (super precise beams on both sides of the body, meaning that fewer sessions are required). The biopsy showed that the tumour had mutated to triple positive (ER+/PR+/HER2+), so chemotherapy followed, with Herceptin and Perjeta, and an oophorectomy (ovary removal) took me to the end of 2019 when I also had to be treated for lymphedema in my left arm.

In 2020, I was allowed 2 months off chemotherapy, so that I could go to New Zealand, and take up a writing scholarship I had been awarded (right next to Long Bay). I continued with the endocrine tablets, but once I managed to get back to the UK (consulate flight in the midst of COVID19 lockdown), was sent for a scan. As we were waiting for the results, I was hospitalised with chest pain and a puffed-up face, which turned out to be the tumour sitting on my main veins, along with a blood clot in my jugular vein. After 3 nights, I was allowed home, whilst continuing 5 sessions of radiotherapy. A biopsy showed that my tumour had mutated again, to triple negative (ER-/PR-/HER2-), so chemotherapy was changed to weekly paclitaxel (which I managed 17 of). I am now on cycle 2 of capecitabine, whilst awaiting biopsies on possible skin Mets, and CT scans to see why I am breathless, in pain, have serious lymphedema in my right arm – although we’re hopeful that nausea from chemotherapy is under control with the right drugs.

One of the things I often say is that I already have one PhD, and I don’t want another one in oncology! For primary cancer, there is SO much information around and you feel that you are on a well-trodden path. For secondary cancer, it’s so hard to find good information, and, although around 30% of those with primary cancer will end up with secondary cancer (and a number are incurable at diagnosis), there seems to be little support, action, or clear drug paths to follow. I don’t want to spend my shortened life fighting to keep alive by having to learn everything about my cancer and how it can be treated – I want to use my energy for my own work and publications. Since last summer I gained access to a specialist secondary breast care nurse (SBCN), and this has helped access a much better range of services – but I would love to have someone who does all the research (into e.g. trials) and brings options back to me!

Make use of the support that family, friends and professional services offer (try not to be overproud: anything that helps you sleep is great). Look out for growing sources of online information related to SBC and find support through social media groups (whilst also checking the source of any information), and physical places such as Maggies (where advice includes sorting out all your end-of-life stuff, then you can focus on the living). Don’t fall for ‘toxic positivity’ – yes, it’s good to be positive and hope is key, but cancer is hard and you can’t just ‘will yourself better’. When needed, let yourself have space to mourn, grieve and feel crap, then get back up! Get used to living in shorter time frames and think more about what YOU want from life – don’t put things off if opportunities come up. With most treatments having a range of side effects, don’t expect too much of yourself (especially) when you start new treatments. I save energy by keeping people up to date through my blogs on https://drbexl.co.uk/category/cancer (and because so many people want to help, created an online wishlist of things that would be appreciated, as I don’t want more STUFF).

I like exploring new places and have been very fortunate to have travelled widely already (including half a year in Brazil before university, and a year backpacking when my first post-PhD job was ‘not up to scratch’). My favourite memory from that year was taking a trip to ‘Doubtful Sound’ in New Zealand (where Cook doubted that he would ever emerge from it) – after an evening of canoeing, dive-bombing, meals, nature talks, the next day we stopped on a mirror lake, the engines were turned off, and we stood in complete silence for 5 minutes. One of the first places I want to return to once we’re able to travel again is Jersey, where I appear to have been ‘adopted’ by my cousin’s other family – and I get to sea dip! My big plan post-COVID, energy permitting, is to travel around the UK and see friends and family!

Well, there’s an ongoing joke that Homes Under the Hammer is always on the TV in waiting rooms – and I still enjoy watching that, plus a range of daytime programmes. I tend to keep an eye on what friends recommend is happening on Netflix – and need to update a blog post I once wrote about what I thought was worth watching: https://drbexl.co.uk/2018/10/21/reviews-cancer-keeps-you-netflix-busy/

I typically am someone who picks up random fiction books in charity shops, to accompany lots of very expensive academic books. I do love returning to the Harry Potter series and have every book written by Georgette Heyer (and have all the HP, and several GH books on audio to help get to sleep at night – some on Audible, and some accessed free on BorrowBox via my local library).

You can find out more about me at https://drbexl.co.uk/